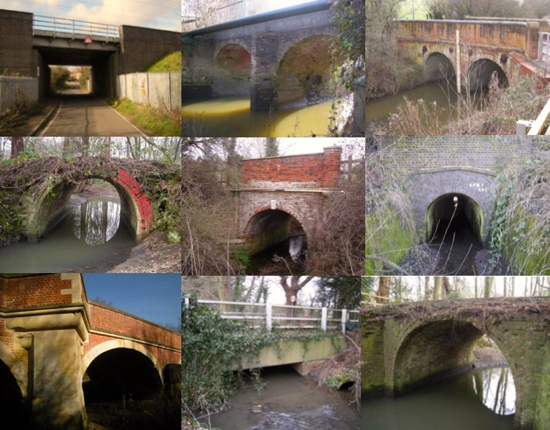 The parish of North Mymms has a surprisingly large number of bridges, many of which are at least 150 years old. Local historian and archivist Peter Miller has been researching local bridges and has produced the following report which includes all the major bridges that are approximately 100 years old or more. He has not included the more recent bridges over the A1M. There is an interactive map of all the locations at the foot of the page.

Bridges of the Ray Brook


Gobions brick bridge spans the Ray Brook in the Grade II listed Gobions Park and Garden. The bridge is thought to have been constructed c1840 after Robert William Gaussen purchased the Gobions Estate in 1838 and amalgamated it with his existing Brookmans Estate.

A new south to north drive was created leading from Folly Arch in Hawkshead Road to the Brookmans Manor House (now demolished), which was located near the golf clubhouse and Chancellor's School.

There is no direct evidence to support the construction date, and it is possible that the bridge could be older. The bridge is now in a poor condition and, at the time of writing, was closed to the public by the Herts and Middlesex Wildlife Trust, which manages Gobions Wood, following an engineer's report.


Blue Bridge was constructed in 1840 when New Road (now Bluebridge Road) was built across country linking Hawkshead Road with Bradmore Lane and what is now Station Road.

Above is an OS map from 1868 showing the recent construction of New Road, Blue Bridge and the railway.

The East Coast Main Line bridge/tunnel is located midway between Brookmans Park station and Hawkshead Road to the south. It spans the Ray Brook and was constructed by Great Northern Railway (GNR) in the late 1840s prior to the opening of the London to York main line railway on 7 August 1850.

Bridges of the Mimmshall Brook

It is not known when the bridge was constructed. The earliest definitive map reference is the 1868 6-inch to the mile OS map below. The bridge does not appear on the 1844 North Mimms Tithe Map.


The tollgate, to which Warrengate Road owes its name, was located just to the south of the bridge on the county and parish boundary and is shown above as Warrengate T.P. (Turnpike). The gate was removed in May 1887 by the Marquess of Salisbury.


The Barnet District Gas and Water Co. built a water pumping station at this location c1923.

A footbridge has existed in this location since at least 1868 and originally connected a footpath between Water End and Hawkshead Farm. It has been rebuilt from the original wooden structure and now connects with Wises Lane footpath (North Mymms footpath 11).

The earliest definitive map reference is the 1868 6-inch to the mile Ordnance Survey map below. The bridge does not appear on the 1844 North Mimms Tithe Map. The original bridge was rebuilt in the C20, date unknown.


Bridges of the River Colne

The Mimmshall Brook ordinarily terminates at the Water End swallow holes, but in times of heavy rainfall, a lake is formed and the overflow is carried in a normally dry riverbed underneath Swanland Road and the A1M and effectively becomes the head of the River Colne.

The Swanland Road Bridge was originally constructed as part of the Barnet By-Pass between 1923 and 1927.


Teakettle Bridge is one of the oldest bridges in North Mymms and appears on the 1844 North Mimms Tithe Map. It stands on the southern end of Tollgate Road, which was once a major route between St Albans and London before the building of the Barnet By-Pass in 1927. The building of the A1M in 1976 severed the connection with Warrengate Road. It is not known how the bridge acquired its name.

It is without doubt the oldest bridge location in North Mymms and a bridge of one form or another will have been at this location for many centuries. It is not known when the present bridge was constructed, although it is known from an early 20th century photograph that the railings on either side were extant then.

The bridge was strengthened in WWII to enable it to bear the additional load of the military vehicles that were accessing the U.S. General Hospital that was located in North Mymms Park.

In an article about the Water End swallow holes by H. M. Alderman in the Autumn 1955 edition of Hertfordshire Countryside, it is stated that the bridge is “a mean affair of weak lattice girders, insufficient to carry the normal traffic using the avenue leading to the church and beyond: it is strutted underneath as a safeguard”.

The struts, which are no longer extant, were presumably part of the strengthening for the U.S Hospital.


The bridge is the main drive to North Mymms House and was designed by architects Sir Ernest George and Alfred Bowman Yeates. George and his then partner Yeates were engaged between 1893 and 1910 by new owners Walter Hayes Burns and his wife Mary Lyman Burns to transform the house and grounds.


The bridge consists of four brick elliptical vaults, with stone dressings and cutwaters, and brick parapet walls with stone copings The centre pier cutwater carries a triangular recess corbelled over it. The entry to the bridge, at each end, is marked by a semi-octagonal bay spreading from the roadway, and terminated by small obelisks on pedestals, which form a stop to the walls.

In the February 1970 edition of Hertfordshire Countryside, Dorothy Colville, whilst referring to the above photograph wrote:


‘The photograph dates from 1902, when Octagon Lodge and the attractive bridge were newly built. The river bed between the two bridges presented this lawn-like appearance until World War II, when the southern, that is the public, bridge was reinforced to cope with the heavy traffic to and from the American general hospital in North Mymms Park. At about that time it was noticed that the river bed was beginning to break away and it is believed that the reinforcement of the bridge caused a turbulence which had not previously existed. Erosion has continued from that time.’

The bridge is Grade II listed and described as:


‘Bridge and flanking walls. Adjoining main gates and octagonal lodge. 1893-4 by Sir Ernest George and Yates. Red brick with stone quoins and coping arches with stone surrounds triangular bastions on SW side. The flanking walls have terminal obelisks and scrolls.’


Bridges of the Skimpans Brook


The bridge is located on Station Road immediately to the south of Welham Green. The original bridge was constructed in 1920 and was dated on its east side. The bridge was rebuilt when the road was widened in October 1958.


Before the bridge was built in 1920, a ford and wooden footbridge existed. This was known as the Watersplash.

Road bridge carrying Hawkshead Lane over the railway. Originally built by the GNR c1850 of brick with three arches and stone abutments, a brick parapet with stone coping and a wooden fence. The middle arch spanned two tracks and the outer ones, one track each. The bridge was largely rebuilt to facilitate electrification of the line in the 1970s. The piers remain but the remainder has been rebuilt with a concrete girder and metal parapet.


The undated pre-1850 GNR land acquisition map, below, illustrates the intent to construct the Hawkshead Bridge at right angles to the railway, rather than the skew bridge as it is today.

The original bridge was a lattice ironwork structure, constructed for the opening of Brookmans Park railway station on the 19 July 1926. The bridge was rebuilt in the late 1970s.

Road bridge, carrying Station Road from Brookmans Park to Welham Green. Built by the GNR in 1880 to replace Bradmore Gate crossing. Building began on January 26 1880 and was completed by November 22 in the same year. It has brick piers which support iron girders over four tracks. A brick and timber parapet was originally constructed but has since been replaced with brick and steel.

A pedestrian bridge built of iron girders with a wooden parapet was added to the south side of the bridge in the 1960s.


Commuters walking in the road before the addition of the pedestrian bridge, note the timber parapet.

Railway bridge over Bulls Lane, built by the GNR c1850. Brick piers, iron girder. The bridge had to be rebuilt when the tracks were widened in the 1870s and was further reconstructed in 1895 and 1898. The iron girders were replaced in March and April 1968. The parapet on the east elevation now differs from the west elevation and has been entirely rebuilt.

Road bridge, carrying Dixons Hill Road across the railway line, to Welham Green. Built by the GNR c1880 to replace Marshmoor Gate crossing, which connected Pooleys Lane with Marshmoor Lane. The bridge was originally constructed of brick with three arches, the middle over two tracks, the outer ones over one track each. A footpath on a steel frame was added on the south side in the 1960s. The bridge was completely rebuilt in brick and concrete to facilitate electrification of the line in the 1970s.

By Peter Miller 2019
Peter Miller is one of the team of four responsible for the North Mymms History Project.


The map below is best viewed in full-screen mode. To activate, click on the oblong icon top right of the map to ‘View larger map’. The icon at the top left of the bar above the map will reveal the list of bridges. Click on the name of the bridge in that list to reveal more details. The colours are as follows:
The light green shaded area indicates the parish of North Mymms.