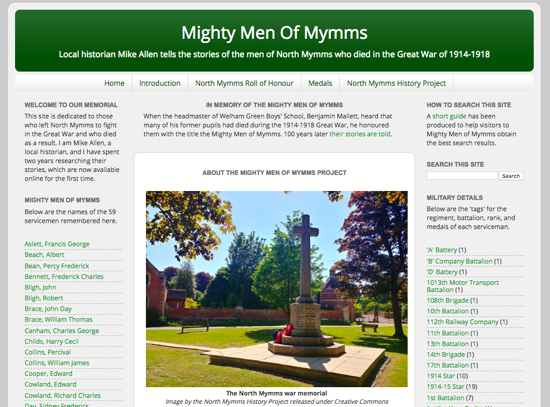 Mike Allen, one of the North Mymms History Project's team of four, has spent more than six years researching the stories of the 59 men from the parish of North Mymms who died while serving, or as a result of serving, in WWI.

Mike started the project in 2012. In October 2018 the material was made available online for the first time, scheduled to coincide with the 100th anniversary of the end of the Great War of 1918-1918.

Why the Mighty Men of Mymms?


The name Mighty Men of Mymms was used by Benjamin Mallet, schoolmaster at Welham Green Boys' School when describing his former pupils who had died during WWI.

In 1919, Mr Mallet published a Roll of Honour, which is on the Mighty Men of Mymms site, and which contains a paragraph about each man.

Since 2012, Mike Allen has been building on the information produced by Mr Mallet, and, after spending many hours researching the topic, has created biographical pages about all 59 men.

Mike writes about the background to the project and why he felt it was important in his introduction to the site.

Exploring the site, and learning more


A list of the names of the men can be found in the left-hand column of the site, linking through to a dedicated page telling their stories.

There is also a page about the medals bestowed on the men, and, in the right hand column of every page, there is a list of their regiments, battalions, ranks, and medals.

Related material on this site and our news site, North Mymms News, includes: