North Mymms From above 1960s

From our aerial photography over North Mymms series 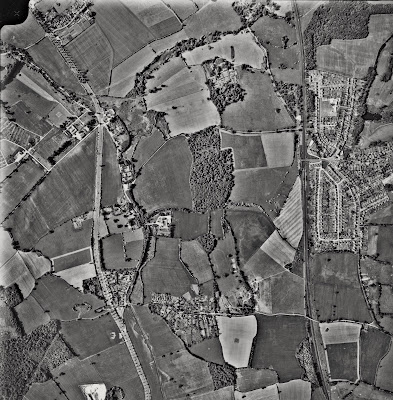 This collection in our series of aerial photographs taken over North Mymms features images shot in the 1960s. This six-image gallery has been uploaded in order to show how the parish has changed over the years.


This photo-gallery is one of six in our series of aerial images over North Mymms. The collection includes a total of 66 photographs taken in 1928-29, 1947, 1948-54, the early 1960s, and 2002. The images show how North Mymms has developed over the course of almost 100 years. There are links to all six galleries at the bottom of this article.

Please feel free to add any observations or comments in the comments box below the gallery.


The images below were collected by the former North Mymms Local History Society (NMLHS) and B. H. Warne. They have been digitally enhanced by local historian and photographer Mike Allen. They are part of the Images of North Mymms collection. Images 1, 2, 3, 7, 8, 9, 10, 11, and 12 were taken by Hunting Aerosurveys Ltd (Associated with Aerofilms Ltd)  Both companies no longer exist. Images 4, 5, and 6 were taken by B.H. Warne. You can click on any image to enlarge and then zoom in to see the detail.

Above: Brookmans Park is in the centre of this picture with the golf course top left and Leach Fields top right. The railway line can be seen running bottom left to middle right with Brookmans Park station in the middle.

Above: Bell Bar is in the middle with the Brookmans Park Transmitting Station above and Brookmans Park golf course to the right. Opposite the Transmitting Station, both the south end of Upland Drive and the north end of Pine Grove have been developed. This accords with the 1960 O/S 6-inch map. Chancellor's School was opened in 1964 but there is no sign of building works in the image. The woodland at the bottom is Millward’s Park, part of the Hatfield House estate, with Woodside above and the road leading to Wildhill top left. The south of Welham Green is visible bottom right showing the sewage treatment plant before St Thomas More Catholic Church was built. Bulls Lane can be seen snaking up to Bell Bar.


Above: In this picture Brookmans Park is top right with a much smaller Royal Veterinary College (RVC) on Hawkshead Lane at the bottom centre of the image. The Barnet By-Pass, now Swanland Road, is running from the bottom to top left. Water End is visible middle left, note Abdale Nursery to the left of the Barnet By-Pass, later demolished by the development of the A1(M). North Mymms Park is top left with part of the Hockey Lane estate visible. Also top left is the old junction of Dixons Hill Road and the Barnet By-Pass with Wakeley’s Nursery visible. Potterells House is middle top and Peplin’s Wood top right. The old lime pits and the location of South Mimms castle are bottom left.


Above: Welham Green with Dixons Hill Road on the left, part of the Travellers Lane Industrial Estate bottom right, and Puttocks Drive in the middle. Dellsome Lane, Parsonage Lane, Parsonage Road, Pooleys Lane, and Huggins Lane are at the top of the image.

Above: The Great North Road (A1000) is running from the bottom to the top on the left. Mymms Drive and Calder Avenue are visible on the left at the bottom. The line of the original route of the Great North Road, on its way to Bell Bar, can be seen in the field at the bottom of Calder Avenue where Shrublands and Woodlands are now. On the right of the A1000 at the bottom can be seen Shepherds Way leading down to Mymwood which is part of Queenswood and was then a preparatory school for girls and boys. The newly built Upland Drive and Pine Grove are visible left middle. Kentish Lane is leading across from left middle to right top. The top right corner is of Hatfield Parish.


Above: The Great North Road (A1000) is leading up from Little Heath bottom left to Brookmans Park top left.  Swanley Bar Lane and Farm are middle left, and opposite is the entrance and driveway to Leggatts House, now demolished and replaced by five luxury houses. Coopers Lane, leading from Potters Bar, can be seen at the middle bottom, passing Northaw Place and Northaw House. Northaw is just visible bottom right. Shepherds Way is running down from top left to the middle, passing Mymwood and Queenswood Schools. Set back from Well Road with two driveway entrances is Nyn Park about a third of the way up on the right side. Nyn Park was destroyed by fire two years later in 1963, and subsequently demolished. Some of the countryside to the right of this image is in Northaw & Cuffley Parish.

Above:  The Great North Road (A1000) is running from its junction with Georges Wood Road bottom left to Bell Bar left middle. Over the parish boundary, in Hatfield Parish, Woodside Lane, the old route of the Great North Road, continues northwards to its junction with Westfield. Kentish Lane is running diagonally from bottom left to top right passing the Brookmans Park Transmitting Station, and further on (after entering Hatfield Parish) joins Grubbs Lane on the left and Woodhill Lane on the right then continues past Warrenwood on the right at the top. In Hatfield Parish, Woodhill House and Farm, and St Mark’s Church (now The Twelve Apostles Church) are visible right middle.

Above: The Great North Road (A1000) is leading up from bottom left to Brookmans Park top left.  Swanley Bar Lane and Farm are bottom left, and opposite is the entrance and driveway to Leggatts House, now demolished and replaced by five luxury houses. Shepherds Way is running diagonally down from middle left to the middle bottom, passing Mymwood and Queenswood Schools. Mymms Drive and Calder Avenue are middle left. Top left is Georges Wood Road, Pine Grove, Upland Drive and Kentish Lane. The trees on the right side are part of Northaw Great Wood. Hatfield Parish can be seen top right, and Northaw & Cuffley Parish middle and bottom right.


Above: The old Barnet By-Pass, parts of which are now Swanland Road or the A1(M), leads up from the bottom, passing the north and south junctions with Warrengate Road to its original  junction with Dixons Hill Road at the top. Water End is visible in the middle with the swallow holes to the right of the north end of Warrengate Road. Midway along Warrengate Road can be seen the water pumping station. Bottom right is Hawkshead Lane and the RVC. Top left is North Mymms House and Park,  with St Mary’s Church visible nearby. Midway between North Mymms House and the north end of Warrengate Road can be seen the ghost footprints of the recently dismantled Hockey Lane Estate where Nissen huts, which were originally erected as part of an American military hospital in WWII, were used for emergency housing after the war. Water End School, closed in 1960 and here converted to housing is visible top middle on the left hand side of the Barnet By-Pass near the North Mymms Cricket Club pitch. The school buildings were demolished with the building of the A1(M) in the mid-seventies. Other casualties adjacent and to the left of the Barnet By-Pass were Abdale Nursery in the middle right and further below three detached dwellings: The Ledge, Long Formacus, and Redlands which was opposite the end of Hawkshead Lane. Part of South Mimms Parish can be seen at the bottom of this image.


Our six collections of aerial images taken over North Mymms are: