Restoration of the belfry at St Mary's, North Mymms


In early 1985 the bells at St Mary's, North Mymms, were lowered from the belfry that most had occupied for almost 180 years. The oak frame which had been supporting them had begun to rot. Woodworm had damaged the beams. The old oak had been supporting six of the eight bells weighing almost two and a half tons. The parochial church council (PCC) feared the frame might collapse, causing damage to the 800-year-old tower. So an extensive refurbishment plan was put in action costing an estimated £20,000 pounds.

200-mile round trip to Leicestershire


The plan involved removing the bells, sending them to Leicestershire for retuning, replacing the oak with a cast iron H-frame set on steel grillage, installing new fittings, and then re-hanging the bells in the belfry at St Mary's.

The work took three months and the bells were returned for rehanging in April 1985. It's thought the work was completed late May or early June 1985. See newspaper cuttings of the work below.

The image above shows one of the bells being lowered from the old oak frame at the start of the process. The image below shows a bell being winched into the new steel frames as the project neared completion.


The tower at St Mary's is not open to the public, but the North Mymms History Project has been given a private guided tour to see how the steel frames, installed 32 years ago, are coping.

Access is via a steep spiral staircase, which is not for the faint-hearted - especially coming down. Interestingly, the same steps are mentioned in Mike Allen's feature on this site entitled the Mason Marks of North Mymms Church. Some of the steps having unique marks signifying the mason who worked on them.

The first door up the tower leads to the ringing chamber where the campanologists gather to ring the bells. Above them, beyond a wooden ceiling, are the eight bells weighing almost three tons which are now supported by cast iron and steel.

At the top of the tower's spiral staircase is a door leading to an obstacle course of metal and wood; this is the actual bell tower.

It's not designed for visitors. There is no floor on which to walk, just a maze of beams, rope, wheels, and bells.

Those venturing to this part of the church have to have a good head for heights, superb balance, and need to be fairly fit. It's hard to imagine how the restoration team worked in these conditions, manoeuvring such heavy material into place with winches and chains.


Returning the bells in April 1985


Back in the belfry are a number of documents giving details about the work that was carried out. The document below states that "The peal was hung with new fittings in a new frame in 1985". Six of the bells are dated 1806, two are dated 1920.


The numbers to the right in the image above refer to cwt or hundredweight (112 lbs / 50 kg), quarter of a hundredweight (28 lbs / 13 kg), and pounds. The total weight of all eight bells is 6,392 lbs or 2.85 imperial ton. This handy converter can help if you want to do your own calculations.

Two new bells were added in 1920. The photographs below are of pages in a book found in the Belfry, the third of which offers more detail about the history of the bells.


The following images are of some of the notices in the belfry at St Mary's. The first dating back to 1901. The signs - in date order - show some of the peals that have been rung in the past, why they were rung, and the names of those bellringers who took part.

The dedication of bells

Some bells were dedicated to the memory of local residents of North Mymms. Two plaques are set in the wall inside St Mary's, either side of the bell tower.

Both dedications were made on July 11, 1920. They are in memory of Stuart Campbell Taylor, DSO (distinguished service order), Edgar William Cox, DSO, and Sir John Eugene Clauson, KCMG, CVO. 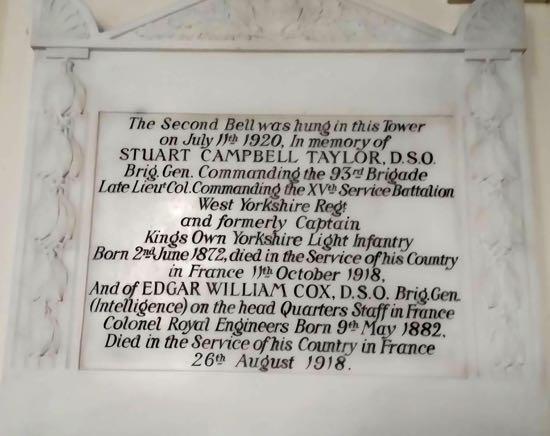 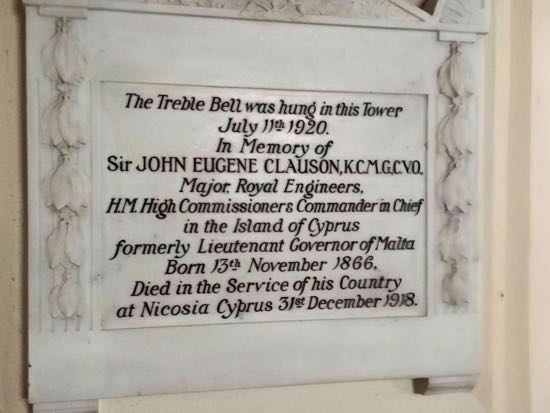 Newspaper cuttings covering the repairs to the bells


Below are two newspaper cuttings reporting on the work undertaken to repair the bells.

The first, from the Welwyn & Hatfield Review dated April 25, 1985 has a typo in the last paragraph when the writer reports that "The bells weigh between 800 and 1,500 cwt". As mentioned earlier, cwt stands for hundredweight, which would have meant that the bells weighed between 40 and 75 tons.

The second cutting is from the Press Group, publish on April 25, 1985. Both cuttings are from The Peter Miller Collection, a local archive of historical images, documents, and cuttings. Peter Miller is part of the team of four who run the North Mymms History Project.


Note: This site has another feature on the bells at St Mary's Church, written in the 1950s, entitled H.M. Alderman on the bells of North Mymms.

The North Mymms History Project is grateful to local bell ringers and historians Adrian Sherlock and Peter Dalling for allowing us to visit the belfry and take photographs of a part of the church rarely seen by visitors. We are also grateful to Adrian's daughter, Jane Russell, for allowing us to use her photographs in this feature, and to Peter Dalling for digitising the original images. And we are grateful to two local archives of historical information, the Peter Miller Collection and the Images of North Mymms Collection for continuing access to their rich archives.