In this articles in Mike Allen's series of North Mymms Notes he looks at the history of the mason marks that have been etched in the stairs leading to the tower at St Mary's Church, North Mymms. Mike has researched why they were made, what they stand for, and why so little is known about the men who helped build the parish church.

Looking back in history, the names of kings, nobles and great artisans can be found, but who were the men who built our fine churches, some of which have stood for 1000 years? We will never know most of their names, but we can sometimes find their marks.

The first priest at St. Mary’s Church, North Mymms, Thomas de St. Albans, was appointed in 1237. In 1328, in the time of King Henry III, we find a licence was granted by the Bishop of Lincoln to Simon de Swanland, lord of the manor, to build a church. St Catherine’s Chapel dates from this period. What did Thomas the first vicar use as a church, perhaps a room in a lord's house?

The main body of the church was added in the C14th, the time of Edward II to Richard II, and the tower in the C15th, the time of Henry IV to Henry VII. But who designed and built it?

In medieval times the masons would offer a design and build service. These men had various levels of ability. The men of the lower orders of their craft, the rough masons, would build the flint walls. The journeyman mason, who had served an apprenticeship in his craft and now wanted to work on his own account, would be able to design and supervise, working himself on the finer work such as the window tracery. The master mason would work on large scale projects. All would have their own apprentices.

Unlike other local craftsmen such as the blacksmith, where work in the area could keep him and his family in existence for generations, masons by the nature of their profession were a wandering band of men who went to where the work was. If a lord wanted his own church, as Simon de Swanland did at North Mymms, he would have had to seek out the men to design and build it.

Local labourers and possibly carpenters were not a problem, but a building such as a church was beyond them, so he would approach, via his contacts, masons working on other buildings in the area and offer them work. St. Giles in nearby South Mimms and St. Margaret's in Ridge would have faced the same issue.

A master mason would be unlikely to work on a building such as St. Mary’s, but a journeyman mason and his apprentice, having heard of the project through the medieval word of mouth network, would find it of interest, coming with his own team of trusted men.

This journeyman mason, being in charge, would have supervised the other trades working on the project, the blacksmith was also important because he would sharpen the tools used by the masons.

The masons, being nomads, would have had built a wooden shack to work, sleep and eat in near to the building under construction. This was known as the mason’s lodge. Any would-be mason looking for work would have presented himself at the door giving secret signs to identify him as a mason. Having the tools with him was not a sign that he was a mason; the tools could have been stolen or bought cheap from a mason unable to work anymore. If there was no work, he would be given food and shelter for the night and recommendations for other work in the area.

The stone used in St. Mary's and other local churches is Totternhoe Clunch, a type of hard chalk quarried near Dunstable in Bedfordshire. This quarry is still in use today. To avoid transporting waste the stone would have been roughed out in the quarry. In its green state, i.e. freshly dug, the clunch is very easy to work, getting harder as it dries out.

The mason in charge now had a problem. He had the labour, but how did he check on the quality of the work produced, it being the mason’s responsibility for the total job. It is likely that, in the early stages of employment, the new mason would mark his work with either his own unique mark or one assigned to him at the job. Once this first work had passed the critical eye of the mason in charge, the man would carry on working without having to make his mark again, masons being paid by the day not by the piece.

How did you become a master mason? You made your reputation as a journeyman then you made your masterpiece which would be examined by your lodge master, and if found to be of the highest quality you would be admitted as a master mason.


Over the years, St. Mary’s would have had restoration, refurbishment and repairs. We know a major refurbishment was carried out in the 1860s, which saw the church much altered. A restoration was took place in 1913, so it is likely that many of the mason marks would have gone. Also the mason could put his mark anywhere on the piece, each stone having at least six faces, so the mark could be out of sight or covered with mortar.

There is no record of the names of the masons, there being no central guild as with other trades. At St. Mary’s we can find masons marks in the C15th church tower which has 75 stone steps. We find 11 have mason's marks, step 46 is C20th graffito.

The stairs are not open to the public due to health and safety concerns. It can be seen that some steps may have the same marks, and possibly, on step 22, the intertwined V could stand for Virgin of Virgins and be a later witch marking - such a mark, it was believed, would have stopped a witch coming down the stairs!

Each part of the marks were made by one strike of the chisel, and are approximately two inches, or digits wide, a digit being the width of a man’s thumb. 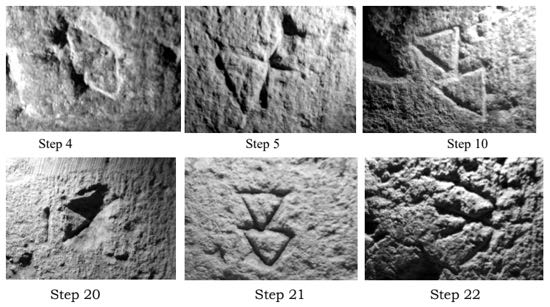 
This is one article in a series of historical features called North Mymms Notes, researched and written by local resident, photographer, and historian, Mike Allen. The pieces are designed to offer a short glimpse into the history of the parish, and are used, by Mike, in local displays and presentations. Mike is one responsible for the Images of North Mymms Collection, and is one of the team responsible for the North Mymms History Project.


Mike's original piece is embedded below