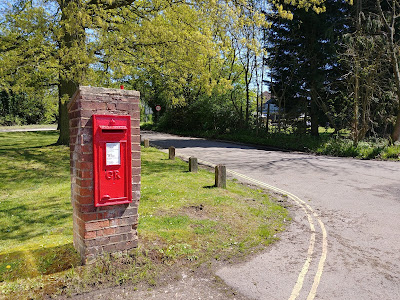 There are 15 post boxes in the parish of North Mymms, one dating back to Victorian times. The North Mymms History Project has mapped and photographed those still in service as of May 2018, and has also researched the post boxes that served the parish in the past.


You will notice initials at the beginning of each of the captions below. These are known as the royal ciphers, and were put on all post boxes to show who the monarch was when the box was introduced. We have VR, GR, and ERII post boxes in North Mymms as well as a GVIR in nearby Roestock, which was once part of the parish.

The following explains what the initials indicate.


This feature lists 19 post boxes. Five are outside the current North Mymms Parish boundary, but those in Roestock were once in the parish and have been included for historical reasons. The VR post box outside Pepperpot Lodge on Wildhill Road, Woodside, is just over the North Mymms parish border and would have been used by residents of the parish. The  Wildhill VR post box has been included because of its proximity to North Mymms and because of its age.

Post boxes have been known by an assortment of terms, all valid, such as letter boxes, wall boxes, mail boxes, pillar boxes, and even lamp boxes (where they have been attached to street lighting). We have referred to them as post boxes in the main text but by the other names in the captions beneath the images.

The Royal Mail and Historic England have produced a document recording all types, embedded at the foot of this piece.

As with all our features, please feel free to add your comments in the box at the end of the article.


There is one post box in Bell Bar, a hamlet that, at one time, had its own post office. The one remaining box is at the corner of Bell Lane and the Great North Road (A1000).

Note that in the picture above the sign indicating the direction to the post office is pointing the wrong way. The picture was taken in May 2018, three months after the post office moved from Cards & Toys to shared premises at Charlies Valet. The sign actually points to an earlier location for the post office, at Bloxham's, also on Bradmore Green.


There are two post boxes in Little Heath. One, at the junction of Osborne Road and Hawkshead Road dates back to the Victorian era. It's the oldest post box in North Mymms and the only one carrying the royal cipher VR. The other is a GR post box at the junction of Frampton Road and the A1000.


The post box at the southern end of Warrengate Road near the junction with Hawkshead Lane and Swanland Road is officially listed as being in North Mymms.


There is one post box in Swanley Bar at the junction of Swanley Bar Lane and Hawkshead Road near Folly Arch.


The Water End post box is at the north end of Warrengate Road close to the Swanland Road junction.


Wildhill isn't in North Mymms, but locals would have worked in the area and probably used the Victorian-era wall box at the east end of Wildhill Road.


The post box outside Pepperpot Lodge on Wildhill Road, Woodside, is just over the North Mymms parish boundary and would have been used by people living in North Mymms.


The first and only post box in North Mymms for a number of years was a VR wall box located in the wall outside Water End School. If you look carefully at the photograph above, the post box is visible in the left-hand brick pillar.

At the time there were two post offices in North Mymms, one in Bell Bar and the other in Welham Green. Water End School closed in 1960, and was demolished in the 1970s to make way for the A1(M).

By the early 20th century the North Mymms post box population had risen to three. The residents of Little Heath were now able to post their letters in a VR wall box, still extant, located in the wall of Osbourne House at the junction of Osbourne Road and Hawkshead Road.

Kelly’s Directory did not list the Little Heath post box in any editions for some reason, and, although it is a Victorian post box, it did not feature in either the 6 inch or 25 inch OS maps for 1898 (revised 1895). It was not until the 1914 (revised 1913) 25 inch OS map that the post box is first indicated. It is likely, therefore, that the post box was erected in the late 1890s, shortly before Queen Victoria's death in 1901.

The third post box, and also still extant, is a VR wall box in Roestock Lane, which was then in North Mymms. Kelly's Directory first mentions this wall box in the 1908 edition, stating, 'Wall Letter Boxes, Water End, cleared at 7.25am & 5.40pm & Roestock, cleared at 10am & 5pm'.

The 1924 (revised 1922) 25 inch OS map shows the location of the Welham Green wall box as the right-hand flank wall of Post Office Row, Dellsome Lane (now demolished). The reason for the introduction of the wall box at this location was because the post office had relocated from Post Office Row to Holloways Lane.

By the time of the publication of the 1939 (revised 1937) 25 Inch OS map the wall box had been moved from Post Office Row to the north-west side of the junction of Dellsome Lane and Dixons Hill Road (see image below).

A mystery surrounds both of these pillar boxes. The Thornton Road one is no longer there, but there is a GR pillar box (1910-1936) located nearby on the south side of Frampton Road junction with the A1000, was it moved?

There are also other anomalies:
Did the Post Office recycle old pillar boxes? The embedded pdf below sets out the Royal Mail's policy regarding the removal, repositioning, and recycling of old post boxes - and there are complex rules and regulations, particularly where a post box is listed.

By 1938 the post office in Bell Bar had closed and been demolished and a new post office was opened in Brookmans Park during this period. The 1940 (revised 1938) 25 inch OS map indicates the introduction of the extant wall box located at the north junction of Bell Lane and the A1000 which was probably located here when the post office closed.

By Royal Mail and Historic England


Postal services in North Mymms over the years


We have another feature on the site looking at how the postal services in North Mymms developed over the years. The item contains old maps, photographs and documents, some of which are available online for the first time.