Folly Arch through the ages

Tracing the history of the North Mymms landmark


Folly Arch has stood as a prominent North Mymms landmark since the first half of the 18th century. Local historian and archivist Peter Miller has been researching the history of the Grade II* listed structure and its eventful journey to the present day.


Folly Arch through the ages


Folly Arch is attributed to the architect James Gibbs (although there is no direct evidence to support this), and was part of garden designer Charles Bridgeman's plans for Jeremy Sambrooke of Gobions.

The arch is listed by Pevsner and the Historic England Grade II* listing as being built c1740. However, there is no definite way of dating the arch, and it is possible that the arch was constructed as early as the 1720s as it is known that the gardens were already well advanced in 1732 when Queen Caroline visited. 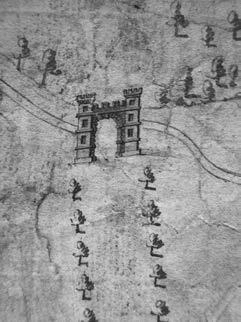 The drawing to the right is the earliest known, and possibly predates the building of the arch.

It is taken from a map of Gobions in the Bodleian Library, Oxford, and although undated and without a title or surveyor it is possibly a design by Bridgeman himself.

The map was erroneously listed in the library catalogue as a 'Map of North Mimms Park' and was not identified as Gobions until landscape historian Anne Rowe recognised it as such c2010.

It is clear that the arch was constructed identically to this design.

It is also possible that, given the accuracy of the drawing, the arch was already built as an entrance gateway to Gobions House and later incorporated into the Bridgeman designs for the gardens as a folly.

These two drawings below, by John Chessell Buckler, show the arch still looking extremely crisp 100 years or so later in 1840.

The photograph below, c1890, which is the earliest known picture taken of the arch, was originally published in 'A Later Pepys Vol 1' by Alice C.C. Gaussen and published by Bodley Head in 1904.


Although it is only 50 years after the Buckler drawings, it shows the arch to be in a poor condition with most of the battlements in a ruinous state.


The photograph above, taken by George Knott c1900, evidences extensive repairs with the arch having been restored to its former glory.

Unfortunately, the repairs were only to last another 50 years or so and by the late 1960s the arch was in a poor structural condition again and facing possible demolition.

The following letter was published in the December 1969 edition of 'Hertfordshire Countryside'.

Letter from Hertfordshire Countryside from the Peter Miller Collection


The following photographs taken by Mike Allen in the 1960s illustrate in more detail the ruined battlements and hole in the west tower.

Fortunately, once again the arch was restored and was able to grace the font cover of the March 1975 edition of 'Hertfordshire Countryside'. The new brickwork is clearly visible in the photograph. Note the addition of the tie bars to both towers as part of the restoration. There are two in each tower joining the north and south battlements together.

Cover from the Peter Miller Collection

In November 1998 a large crack appeared and the North Mymms District Green Belt Society (NMDGBS) wrote to English Heritage alerting them to the perilous condition of the arch.


A barrier and 'dangerous structure' sign were placed in front of the arch but it was not until another letter from the NMDGBS was sent to English Heritage that metal props were installed as a holding measure, nearly one year later in September 1999.


It was only after extensive and protracted negotiations (recorded on this site in a piece entitled Repairs to Folly Arch) between the NMDGBS, the owners, Borough Council and English Heritage that repairs finally commenced four years later in 2003.

Underpinning the towers was prohibitively expensive. So it was decided to ensure the integrity of the towers and arch in the medium term, accepting that settlement was likely to be progressive and further remedial work to the foundations may be essential.

The arch and panel above have been reinforced. Tie rods have been installed between the towers in drilled holes, plus diagonal tangential ties terminating in a reinforced concrete beam cast in the former gutter between the arch parapets.

The most eroded bricks have had extensive repointing and replacement, filling the voids left by decaying wall plates. External faces of the brickwork have been repaired and the tie cores pressure grouted with a cement grout. Reforming and supporting the jetted battlement tops, cornices and details should ensure the most exposed and inaccessible structure has been given an extended life.

The work was completed in July 2003 at a total cost of £112,000 partly funded by an 88% grant from English Heritage (EH). None of the strengthening work is visible, so it is easy to suppose that only superficial brick repairs have been carried out, which is not the case. A monitoring regime and contingency plans have been agreed with EH should further movement occur. The Building Research Establishment thought the Cedar tree close to the east tower was largely responsible for recent shrinkage of the clay subsoil, which has resulted in differential settlement of the towers leading to the distress and damage.

EH said that it is likely that future stability depends upon effective management of adjoining trees (to limit soil shrinkage) which are not under the control of the owners of Folly Lodge and Arch.

It is clear that the structural integrity of the arch will undoubtedly need further attention in the future, probably in about 50 years if the past cycles are anything to go by, and I hope that future generations will look after the arch as well as the past.